The City of Darebin is home to an extensive Public Art Collection enhancing the urban landscape.

“Three Follies” reconnects residents to the isolated island oasis of Ray Bramham Gardens by providing an interactive and playable work which honours the botanical theme of the park while subtly referencing the site’s industrial history. The artwork is a series of sunken, suburban garden follies, located at three key points within the space. A sunken arch appears as an architectural ruin suggestive of an old kiln, a brick hedge mimics the shape of a parterre garden and a stage forms a raised viewing platform to admire the pond.

This iconic Mural suffered significant weather damage and material deterioration over the past three decades of being exposed to the elements but has recently been lovingly restored. The mural was designed by Megan Evans in consultation with a committee from the Aborigines Advancement League consisting of the late Lin Onus, the late Molly Dyer, the late Ron Johnson, the late Elizabeth Hoffman and was painted by renowned Aboriginal artists Ray Thomas, Ian Johnson, Millie Yarram, Les Griggs, Elaine Trott and Megan Evans with the help of many other volunteers.

Watch the video about the Koori Mural restoration, Koori Mural TOM, from Ged Hart on Vimeo.

By David Bell and Gary Tippett

The symbolic egg form at the heart of this design echoes the hope for recovery and new life, and for the rebirth of the land. The piece also references the conservation role of the park and in particular the role this park plays for the many birds that live and nest within.

The Connection depicts many people coming together in an animated, alive way, the separate components becoming one. It refers to the meaningful links between different groups in the community and the connections which contribute to harmony in Darebin.

The work relates to the themes the “Present” and “Future” with an emphasis on the natural environment. The colour and the reclining form, which appears embryonic, bring to mind birth and new beginnings and the bud, the flowering of life.

The horse in this piece refers to the working animals that were part of Preston’s industrial history. The human, in offering the horse water, is providing it with nourishment. There is a connection that symbolises the inter-dependent relationship between them.

Through the use of sensors and digital controls, FIDO talks to passers by, wags its tail, wiggles its ears and lights up at night.

The materials used, the form and the interactive nature of this monumental work were chosen specifically to respond to the friendliness and vitality of Fairfield Village and enhance the sense of community for this dog-loving precinct.

The fountain tells how water came back to the land after a long drought by making the frog that had swallowed all of the water laugh. 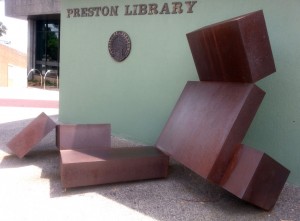 The sculpture is an example of a classic formalist work by one of the early practitioners of the style in Australia. It is probably the earliest abstract sculpture in a public place in the northern region of Melbourne. The work is also socially significant as an example of government-funded visual arts policy of the Whitlam era, which had the expressed intention of placing contemporary Australian art in communities which were overlooked in the past.

by Down Street Studios and Cicada Blue Landscape Design 2002

All Nations Park is a joint project between The City of Darebin and local RSL clubs compromising of several public art works. The two illustrated here are:

Anzac Memorial 2002
The Bowing Soldier, a sculptural stainless steel soldier with bowing head and cast bronze slouch hat will form the centre of the veterans walk and suggests remembrance of those who have fallen in war, in particular the role of service men and women in WW1, WW2, Korea and Vietnam.